How Hulu Built its Living Room Experience with Amazon Alexa

This is a guest post by Ling Shi, principal software development lead at Hulu, originally published on the Hulu Tech Blog.

Smart home device use is expanding rapidly — almost a third of all households in the US used a smart speaker to make a purchase in Q4 2017. With more consumers leveraging these devices to make their daily lives easier, we knew bringing Hulu commands to smart home devices would be impactful and useful for our viewers. That’s why this past fall, we announced Hulu’s first foray into voice control using Amazon Alexa with Fire TV.

In this post, we will explain how we used the Alexa Skills Kit and Video Skill API to deliver a voice-centric experience to Alexa.

This past fall, Hulu viewers watching on Amazon Fire TV were able to enjoy our voice control system on Alexa-enabled devices such as the Echo and the Dot or their Fire TV voice remote.

Below are some examples of commands viewers can leverage to control Hulu via voice:

The technical details of our integration

We developed the Hulu voice command system by leveraging the Video Skill API in the Alexa Skills Kit. The Hulu system consists of the following parts: 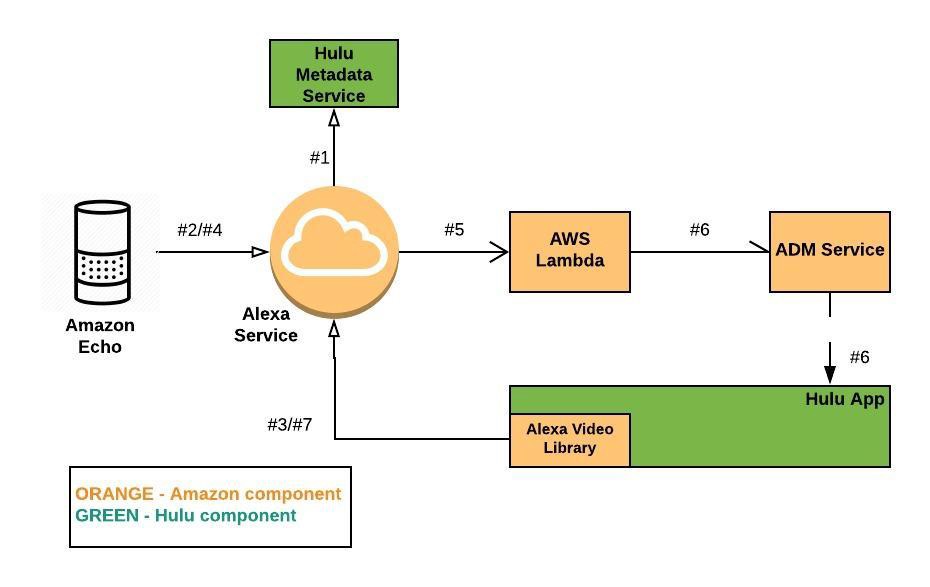 The workflow is structured as follows:

This design was just the beginning, and we’re currently researching additional improvements to enrich our viewers’ experience since the launch of this feature last fall.

Engage your customers with voice

Want to create a more robust voice-forward experience for your customers? Here are three steps to enable voice control in your apps: