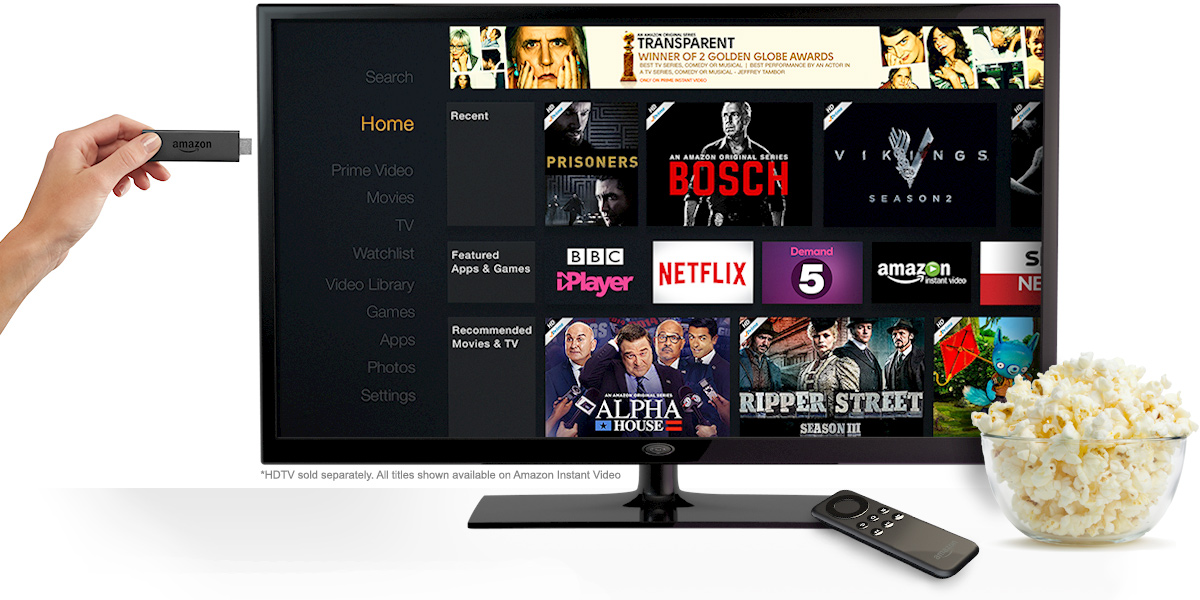 Today, Amazon announced that we are bringing our fastest-selling Amazon device – Fire TV Stick – to the UK, Germany, and Austria. The Fire TV Stick joins Amazon Fire TV, the #1-selling streaming media box on Amazon in the UK and Germany. Fire TV Stick is also now available in Austria. Fire TV Stick is the most powerful streaming stick available, with a dual-core processor and 1 GB of memory. The device has 4x the storage and 2x the memory of Chromecast plus it’s designed for gaming.

Fire TV Stick is available for pre-order starting today in the UK and Germany—it will start shipping April 15th. Learn more at www.amazon.co.uk/firetvstick and www.amazon.de/firetvstick.

For developers, Amazon Fire TV can help you increase your customer base by putting your Android or HTML5 app or game in the living room, in front of people who enjoy entertainment and may not have seen your apps before. Additionally, developers can use the same development environments that they already use for Android development. Plus, they can write their apps or games in Android Java, or as a web app using the Web App Starter Kit or using one of a number of supported development frameworks (for example: Unity). With this expansion to customers in the UK and Germany, you’ll be able to reach even more customers on Fire TV Stick.

Here’s what reviewers in the U.S. are saying about Fire TV Stick:

“The streaming TV gadget is faster, with more memory and storage than the competition. It also comes with a remote control, and the app even lets you speak to search for shows.” – CNN Money

“Turn any TV into a smart TV by plugging this tiny device in to your TV's HDMI port to quickly and easily stream content. Consider it the final nail in the coffins of DVDs, CDs, and other plastic bric-a-brac clogging up your entertainment center.” – Entertainment Weekly

“…the interface, speed of the device and its integration with stuff like Amazon Music and Amazon's photo stuff makes it a really compelling offering. In my limited time with the Amazon Streaming Stick, I've found it to be faster than both the Chromecast and the Roku Streaming Stick.” – Mashable

After announcements earlier today that Amazon is bringing Fire TV Stick to the UK, Germany and Austria, Amazon has now announced new features for the best-selling Amazon Fire TV —including expandable USB storage, private listening and support for captive portal web authentication to enable use in hotels. These features will be delivered as part of a free, over-the-air software update in the coming weeks. Learn more here.

Build something new or bring your existing app or game to Fire TV from PC, console, web or mobile. To get started, you can build with Android or use HTML5.

Meet Us in Person

The Fire TV team will be attending and speaking at a number of upcoming events worldwide. Please visit our events page to learn more.