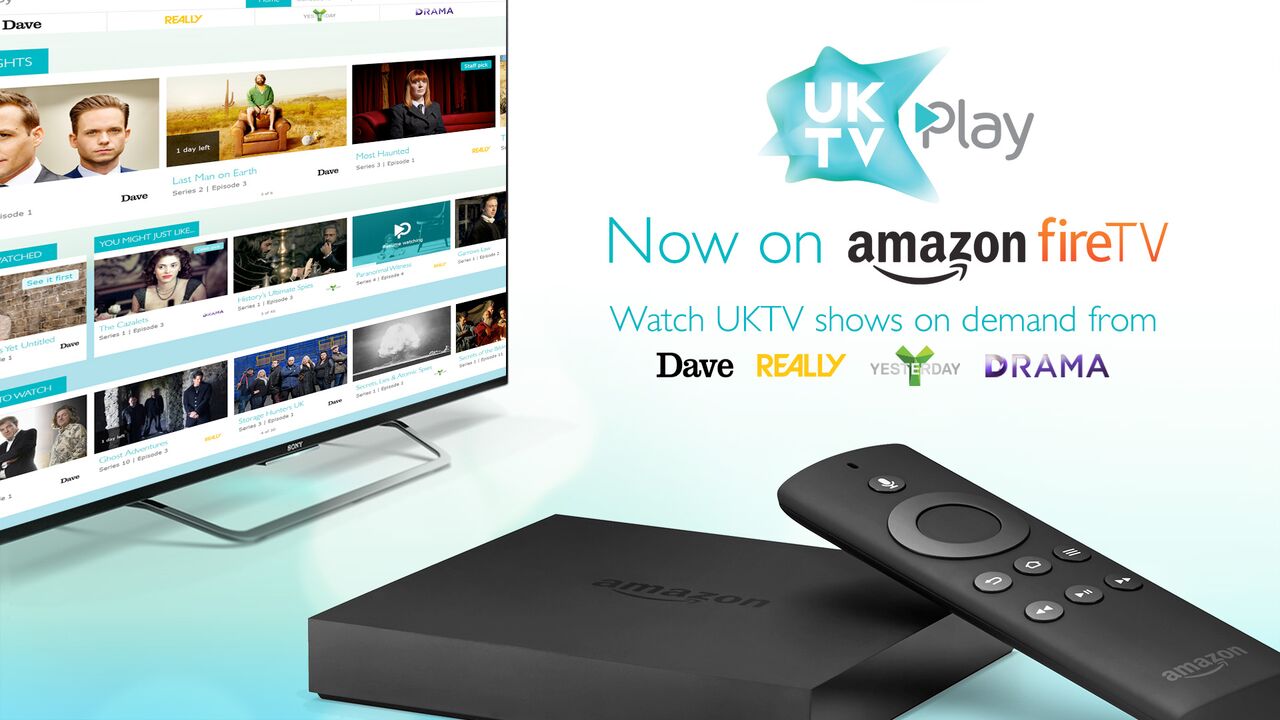 In honor of the launch of UKTV Play on Fire TV this week, we invited Oliver Davies, Head of Digital Products for UKTV, to share his team’s experience developing the video on demand app.  UKTV is a multi-award winning media company that reaches over 42 million viewers every month through innovative TV channels such as Dave, Gold and Drama.

Fire TV and the Amazon Ecosystem

We’re all really excited about our video on demand app UKTV Play launching on Amazon Fire TV. It’s a great device that’s easy to use, puts a huge range of content and services at users’ fingertips and retails at a very keen price. I’m sure that it will be a big success and will only enhance our range of apps now and into the future. It’ll also be fascinating to see how the Amazon ecosystem will evolve and how the range of consumer devices will work together to offer an ever more joined up and frictionless experience for users in different environments. I’m particularly interested in the notion of anticipatory design that aim to answer questions users haven’t yet thought of asking, and I’m sure that new ways of interaction with technology exemplified by Amazon Echo will facilitate ever richer experiences for users.

Planning and development for UKTV Play started in early 2014. After rebuilding our mobile apps in-house and re-factoring our web presence, we initially decided to outsource development of apps destined for TV screens. Our plan was to cover as many consumer devices as possible - set-top boxes, OTT devices (i.e. extra TV services beyond the primary TV device), games consoles and smart TVs - a dizzying prospect for both development and maintenance! After further research into market and consumer trends we rationalised our approach, concentrating on a smaller list of devices and platforms felt to be more strategically important. This allowed us to consider an in-house build for the first time. 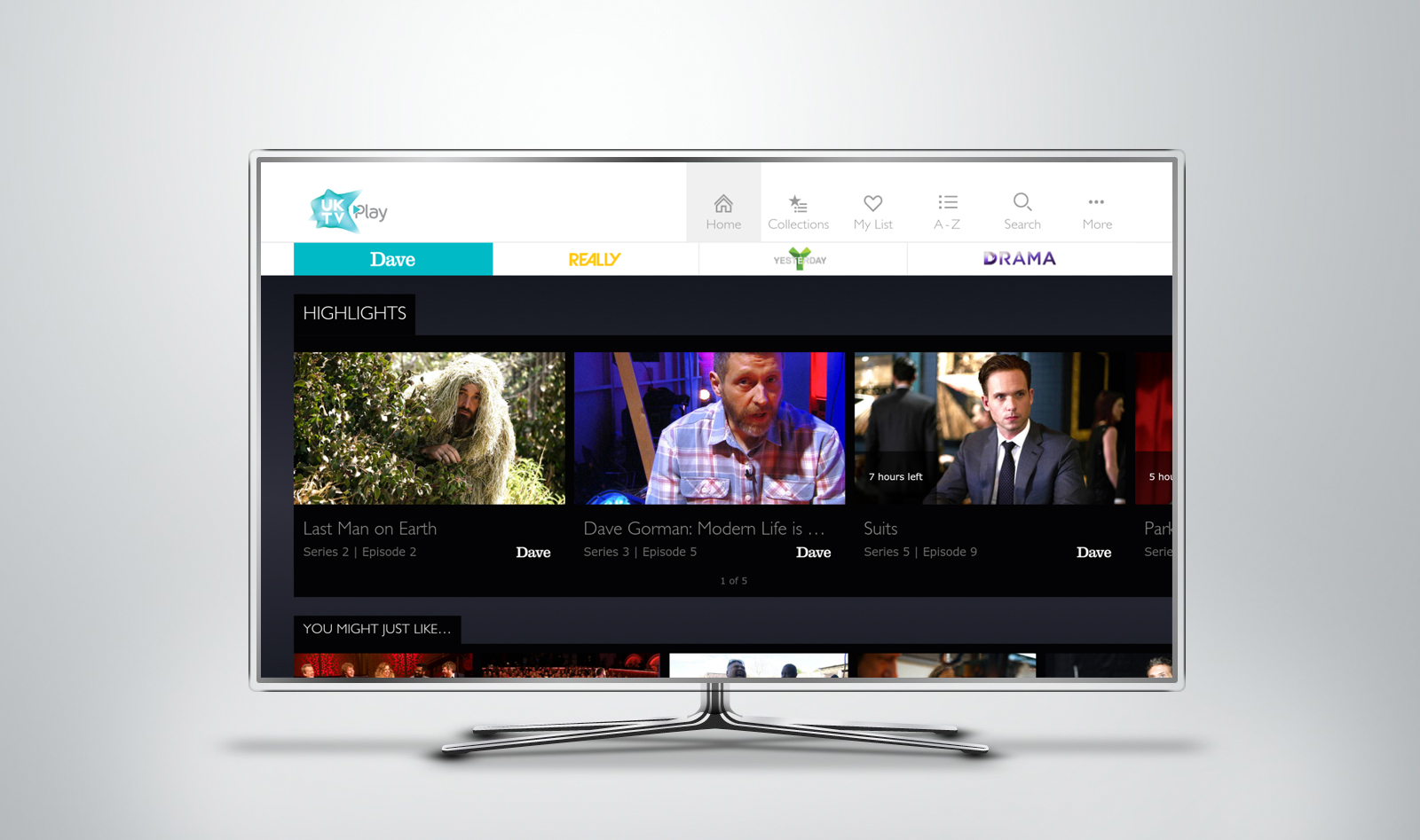 Within the UK, free-to-air platforms YouView, Freeview and Freesat each have (or will soon have) in-built support for third-party on-demand apps and together dominate the non-pay TV market segment. This is clearly the place to start for a broadcaster like us to offer on demand services delivered to the TV set for our Freeview channels. Beyond these we feel that devices such as Amazon Fire TV, Apple TV and the Android TV platform represent a growing opportunity, and are predicted to compete with traditional TV platforms in a very fast-evolving market.

The rise of subscription on demand services such as Amazon Prime Instant Video and Netflix has changed consumption behavior as content is freed from the confines of linear schedules. With so much content instantly available, new challenges around content discovery and relevance emerge that require imaginative uses of data to be solved. The Amazon technology platform, built to power an open and democratic marketplace for physical goods, is well placed to facilitate wide but relevant consumer choice.

Thankfully most TV platforms support HTML5 and JavaScript as the client-side code environment, allowing our front-end lead Owen Evans to oversee the development of a single universal codebase for a ‘reference’ app.

At the outset of the project our research into appropriate app frameworks was pretty short! We quickly identified the two open source frameworks we felt were most appropriate to our needs - Enyo and TAL, the basis of the BBC iPlayer and other BBC TV apps. After further research and prototyping, we established TAL as the best option for us, and struck up a very fruitful dialogue with the TAL product team based at the BBC in Salford.

Working closely with our design and UX team led by Maike Thorade, development began in earnest in early 2015. We arranged a ‘development spike’, a week spent out of the office with a group of expert technologists from ReThought Solutions, a consultancy we knew from a previous project. Based at the Institute of Directors, it was a really stimulating and exciting experience for the team, and we were able to turn our rough prototypes into a basic working version of the app by the end.

We already had the building blocks of the app back-end from our in-house work on the mobile and desktop apps that handles the media management, content scheduling, metadata and editorial layers for the product. Additional APIs and services were developed to power the Fire TV app, overseen by our senior developer Oli Hilton. Best of breed solutions already in use were extended to support the Fire TV app and future apps. Our online video partner Brightcove already handles transcoding, encryption, DRM, geo-checking and hosting of our content library, and to these we added PlayReady renditions for protected playback on the Fire TV devices. Advertising is served into the player using FreeWheel technology, images are handled by our digital asset management solution provided by Third Light and transformed on-the-fly for optimised presentation using image service Cloudinary. App hosting is provided by AWS, monitored using New Relic, and our recommendations engine is powered by The Filter. Quite a list of third-party services to bring together!

Designing for the 10-Foot Experience 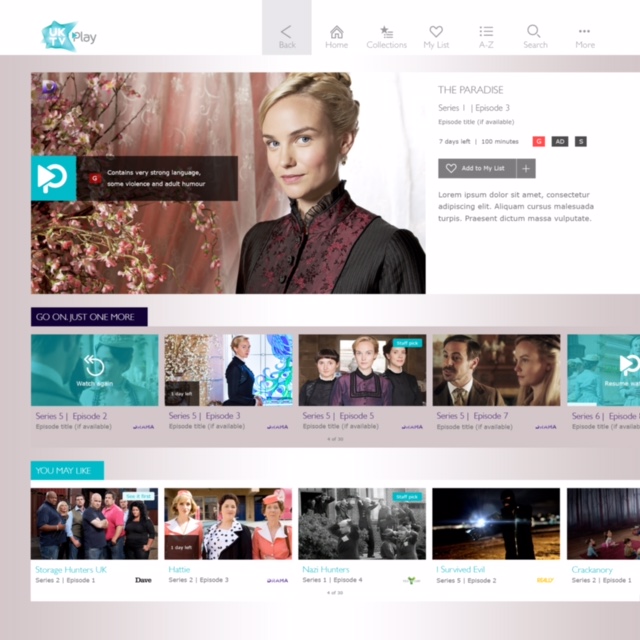 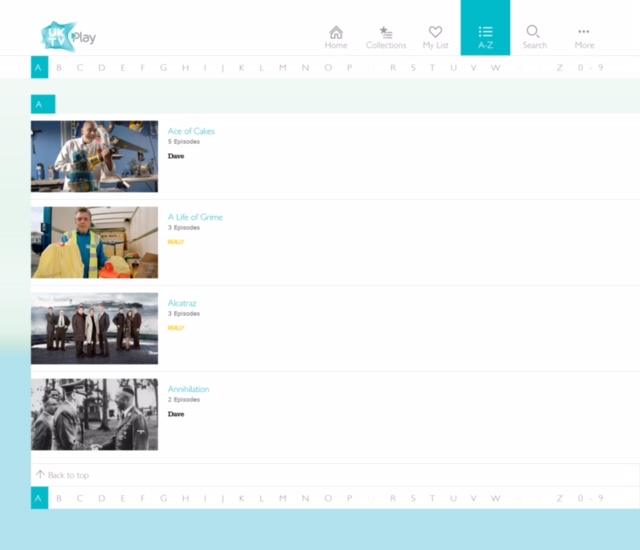 From a design and UX perspective, we had already developed successful 1-Foot and 3-Foot (i.e. mobile and desktop) experiences, and the next challenge was the 10-Foot interface for the TV screen. User interaction is subtly different for each: for touchscreen devices interaction is via swiping and tapping, on desktop it’s via mouse clicks and hovers, and on TV it’s via remote control interactions. A remote, even one as intuitive as the Fire TV, has far less fine control than a mouse, so it’s important to factor in very simple interactions that visually indicate ‘focus’ to avoid confusion and unnecessary concentration by the user. Subtle enhancements such as enabling click and hold to scroll through lists and carousels make users’ lives much easier!

Other factors when designing for TV are well documented in Amazon’s guidelines, and include less screen clutter, use of TV safe colours, simple larger typography and clear labeling. We agonised, for example, over the use of ‘History’ as a label to indicate a list of watched programmes, and the potential to be confused with programmes about history – something that was revealed in user testing.

From a branding perspective we worked hard to present our network and channel brands in a meaningful way to users. UKTV Play is our umbrella brand for on demand and digital experiences, but is still new and relatively unknown amongst our viewers, in contrast to our channel brands such as Dave and Drama. As the app represents on demand and archive content from four of our channels it makes sense to lead with our network identity, whilst blending in the characters of the individual channels.

Adding personality through editorial is key to making the product enjoyable to use. Our editors bring together programmes from across the network into a diverse set of collections. From “Dave’s Comedy Club” that contains programmes such as Parks and Recreation and Ross Noble Freewheeling, to “Trainspotting” that includes episodes of Monsoon Railway and The Flying Scotsman, the collections are a great way to repackage content in innovative ways. Staff and celeb picks are also fun ways to add extra personal perspectives to selected highlights.

UKTV's eleven imaginative brands together account for over 9% of the British commercial TV market. We’re becoming an increasingly significant investor in UK creativity, and our recent original programme commissions include Storage Hunters UK, Marley’s Ghosts starring John Hannah and Hoff The Record with, well, The Hoff. Alongside our originals, we curate the very best of the BBC and high-profile acquisitions such as Suits and Last Man on Earth.

The Digital Products team within UKTV has overall responsibility for the digital output of UKTV across web, mobile and consumer devices such as YouView. The team is 12 strong, made up of front- and backend developers, designers, UX specialists, project managers and testers. Consultants, freelancers and contractors are used to work alongside the team when necessary.

For UKTV Play we’re fortunate to work closely with other parts of the business to cover every aspect of planning and running such a complex project. Together with our colleagues in marketing, press, commercial, legal, editorial and insight amongst others, we are able to bring a strong digital products perspective to the overall governance of the project.

After emerging from education in 1993, Oliver has worked exclusively within “digital”. In those days, though, it was called “multimedia”, and Oliver set about becoming an expert. His breakthrough was producing kids CD-ROM project “Learning For Life”, interactive ‘life’ lessons featuring a family of animated characters. Then the Internet happened, and Oliver found himself in a design agency rebuilding the London Tourist Board website, coining the name “Visit London” along the way. The funky Islington loft was swapped for the hushed corridors of BBC’s Broadcasting House, as a project manager in Radio & Music Interactive. Joining just as BBC Radio Player was launching, this was a key moment in the evolution of streaming media services. Oliver then joined FremantleMedia, the global TV production company, and five delirious years running digital production for The X Factor, Britain’s Got Talent and The Apprentice amongst others. Social media became “a thing”, second screening happened and all sorts of other things that changed TV. All things end however, and rubbing shoulders with the likes of 1Direction, Susan Boyle and Harold from Neighbours wasn’t enough to be lured away by the charms of UKTV. It was time for Oliver to get serious and start wearing smart clothes. The esteemed broadcaster, for reasons still unclear, trusted Oliver to make video on demand products to take on the world. He did, with gusto, and still does.