Submit Your Apps in Time for the Holiday Rush : Appstore Blogs

Submit Your Apps in Time for the Holiday Rush

Now is one of the best times of year to submit your apps to the Amazon Appstore and have them published for Android phones and tablets, including the new Kindle Fire line of tablets. In 2012, we saw a 50% increase in the number of app downloads during Thanksgiving week as compared to an average week. During ‘Digital Week’ in 2012, the week after Christmas, customers purchased and downloaded 600% more apps than an average week during the year.

As we’ve noted in earlier blog posts, it’s easy to get started as 75% of the Android tablet apps we’ve tested already work on Kindle Fire without any extra development. Amazon also has a tool that quickly ensures your apps have the best chance of passing both Amazon Appstore and Kindle Fire compatibility testing. Even if you’ve already got an app in the Amazon Appstore, you can use this service to check out any updates you plan on submitting.

The testing tool works fast and screens your apps for potential errors or incompatibilities. For example, you’ll learn:

If an issue is found, you will also get some suggestions for fixing the problem. Note, the tool is not designed to replace debugging in your IDE, and it won’t find null pointer exceptions or similar coding errors.

To get started, you can find the tool in the SDK & Tools area of the Developer Portal where there is now a link for the App Testing Service. 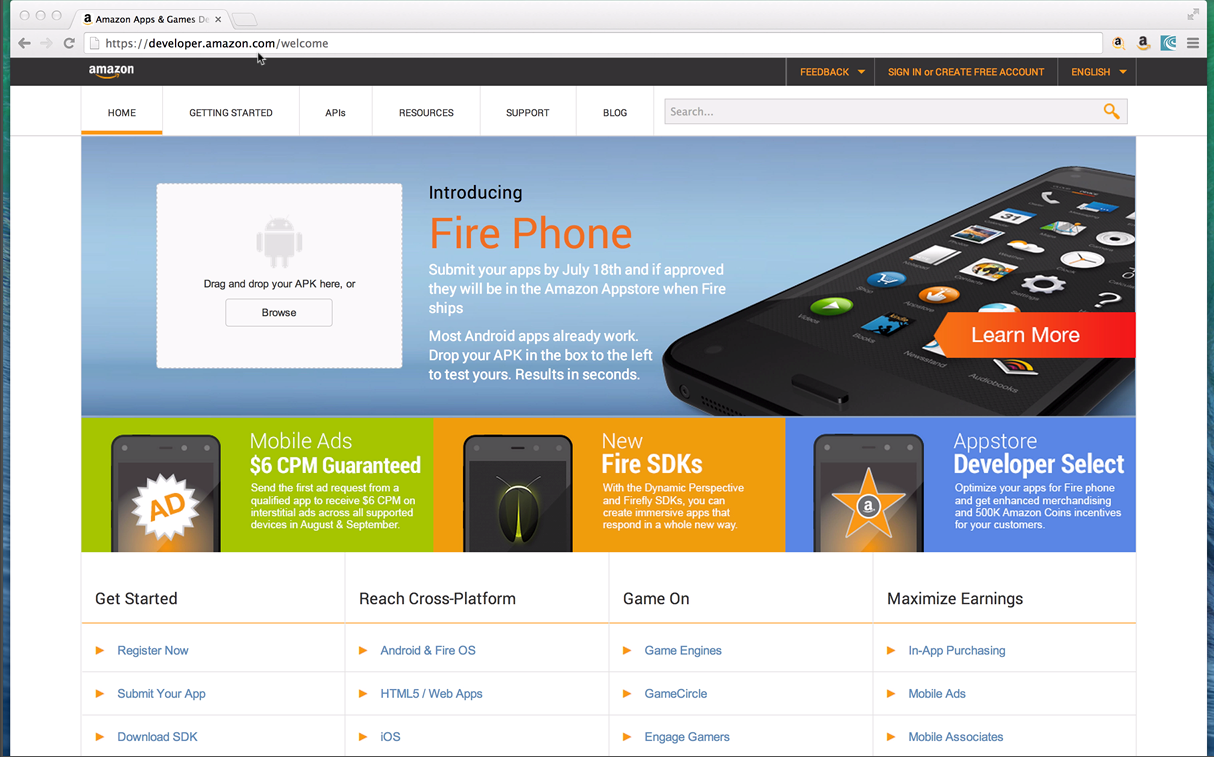 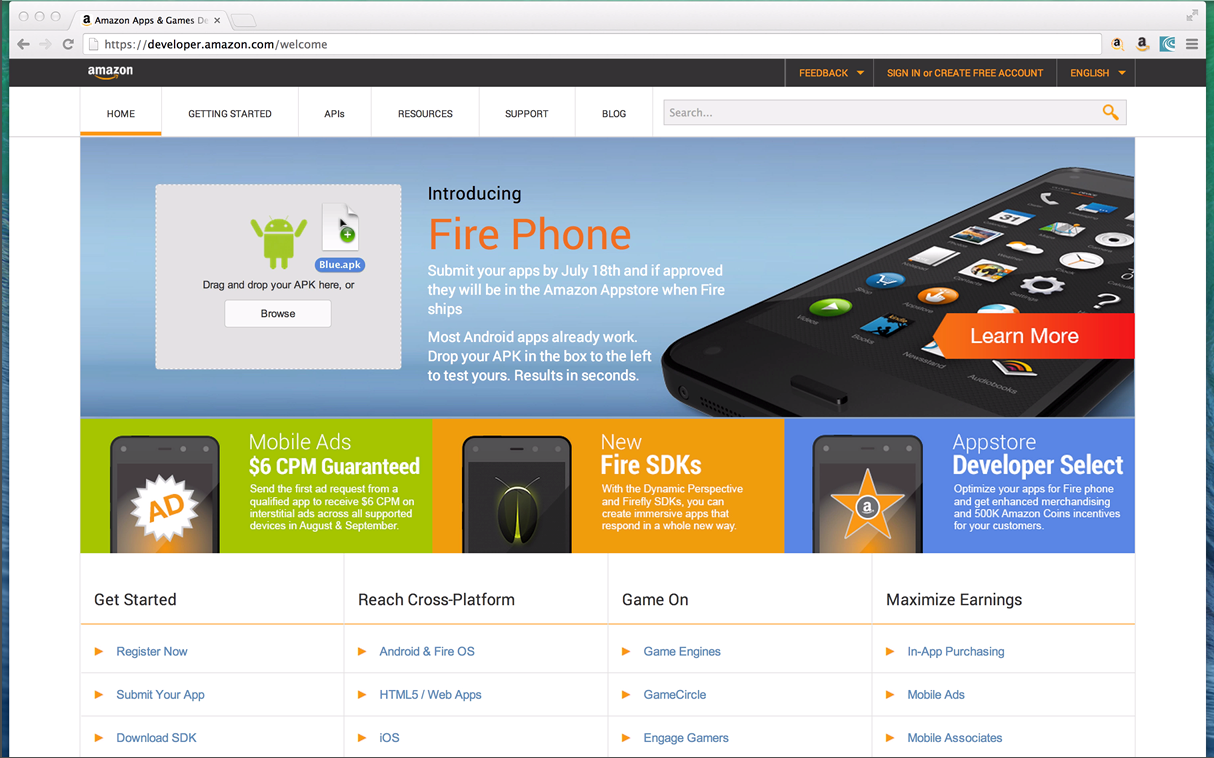 To give you a sense on the experience you can expect, I’ll walk you through the short process. I started with a small quotation app that I created and dragged it into the tool. The testing was complete in under a minute and my app passed. The tool then displayed a ‘Submit to Amazon Appstore’ button that I could use to start the app submission process.

Next, I tested the same app that used Google In-App Billing instead of Amazon In-App Purchasing. The tool caught that error and correctly identified the issue and offered suggestions for fixing my app. Here is that test result: 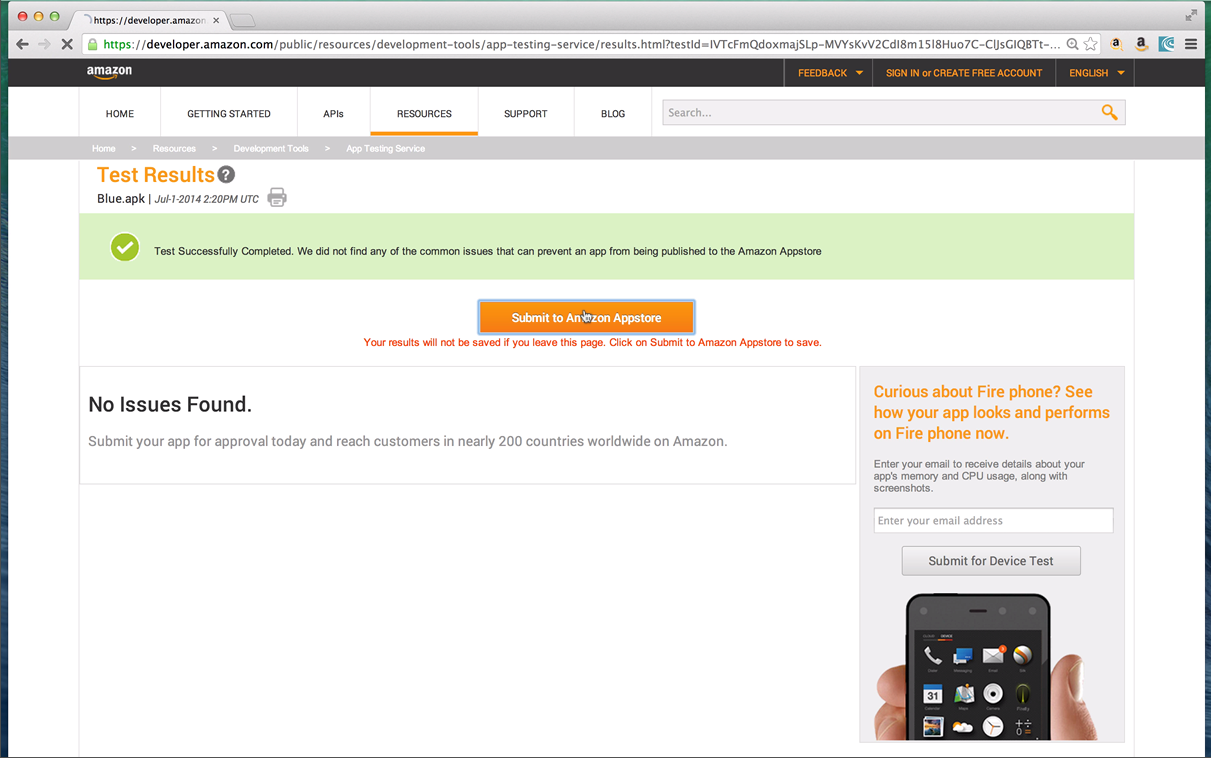 Here is another test result that identifies an error in In-App Purchasing implementation: 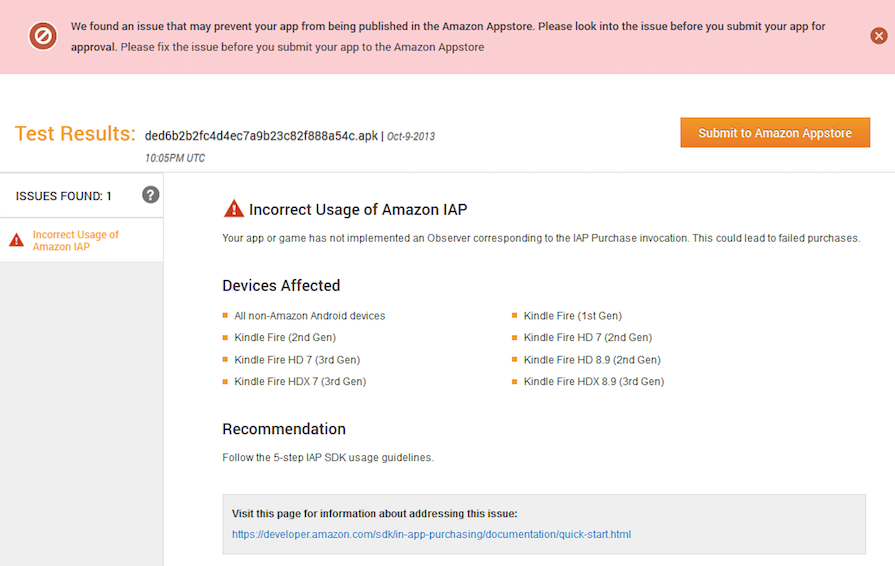 Once the test is complete, you can find the results of this and all your tests in a table at the bottom of the app testing page. This lets you go back and re-visit previous issues and recommendations across all the apps you have tested.

So don’t miss out on getting in front of all those customers during the holiday season. Save time and go to https://developer.amazon.com/tya/welcome.html and make sure your apps are ready to submit to the Amazon Appstore.